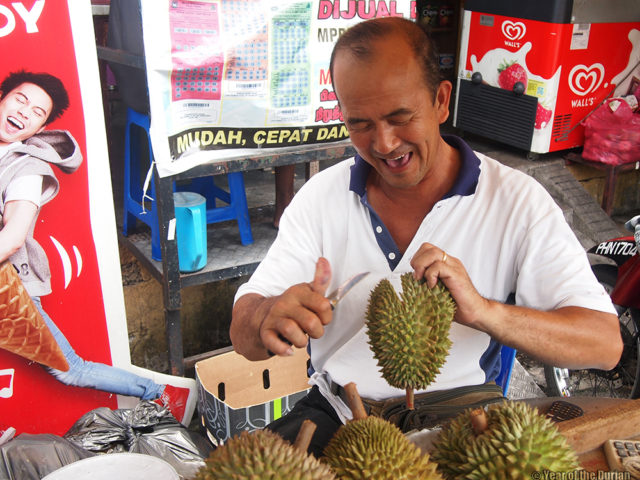 His was the first durian I bought on Penang back in 2012. He’s probably where you bought your first Penang durian, if you were staying on Chulia Street.

His stall is simple, just two collapsible tables wedged between his brother’s juice cart and a guy selling coconuts on one of the busiest streets in the heart of the backpacker district. It happens to be located right across from the street from the 7-11. So that’s what we called him, The-Durian-Guy-Across-From-The-7-11, all in one breath like it was some kind of name or title. But he has a real name. It’s Ah Hoe.

Chang Chin Hoe lives along the snaking switch-back road leading from Balik Pulau to Teluk Bahang, nearby the nutmeg factory. If you’ve ever driven to Bao Sheng’s Durian Farm, you’ve passed his house and his 2 acre orchard.

I ended up at his house not knowing it was his. A mutual friend introduced us, insisting I had to meet this real durian expert.  “He’s an old school durian guy,” he said, “he was literally born under durian trees.This guy can recognize the durian clone by the shape of the leaves, no need for fruit!”

I recognized him immediately. “Hey! You’re the guy across from 7-11 on Chulia Street. I bought my first Little Red from you.”

He grinned, but didn’t recognize me at all. I faded into the backpacker blur on Chulia Street.

Mr. Chang’s father was a nutmeg dealer – buying and selling the ping-pong ball sized fruits in front of his small convenience shop. Later he opened the nutmeg factory across the road  He purchased the 13 acre plot in the 1950’s, but instead of planting nutmeg he planted durian.

“to get his best durians, you can’t just wander by his stall any dusty afternoon. You better make a reservation.”

“Nah, we never planted much nutmeg,” Ah Hoe basically said (this was translated). Nutmegs and cloves were too temperamental, subject to the fungi and insects that basically wiped out the nutmeg industry in the 1860’s. They left the growing of nutmeg to others.

So they were a nutmeg family with a durian farm.

Now his older brother owns the nutmeg factory, and Ah Hoe drives his durians over the mountains to Georgetown in June and July.  But to get his best durians, you can’t just wander by his stall any dusty afternoon. You better make a reservation before he hops in his truck.

In particular, there’s high demand for an old Kampung tree he calls Honey.

“There’s nothing like my Honey,” he said shaking his head. I can see from his little smile that he’s tasting it already, savoring a durian I haven’t yet tasted.  Then breaking from the translator, he describes it in halting English. Yellow color, very sticky, bit like almond flavor, and smells like honey.

I begged him to reserve a Honey for me. I waited for Honey all through June, and waited to publish this blog post too. But alas, it came and went while I was busy with the Malaysia Durian Tour.

I’ll have to wait until next year. So goes the durian hunt.

Originally Published on Year of the Durian

Ultimate Guide to Bukit Tambun: 10 Things to do and where to Eat the Best Tambun Seafood

The Best Restaurants in Penang: 22 multi-cuisine Suggestions for Dining Out in Penang