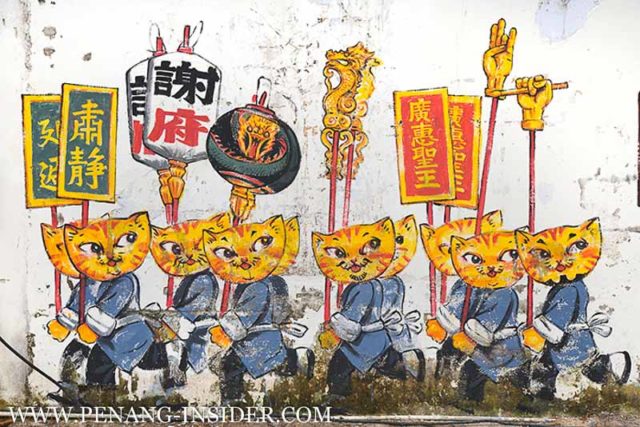 Wall Art in George Town has become one of the main tourist drawcards to the island. Truth be told, there are so many tourists coming specifically because of Penang Street Art, and not because of Penang history, that the whole trend has started to annoy us a tad bit. Originally started in 2012 by Lithuanian artist Ernest Zacharevic, the walls of Penang have become the favourite method of expression of many local and international artists. A few international festivals, most notably the Urban Xchange, helped embellish George Town main streets (and most side alleys) with dozens of wall murals and great-looking street art. But remember: Penang street art or not, outside of hip George Town there’s always much more to do on the island.

Check out our Penang itineraries:

Other Cool Stuff to do in Penang:

But back to Penang Street Art: this post collects 14 George Town wall murals that only depicts…cats. Why CATS in Penang, of all things? We have always seen a lot of mice (well, RATS) running around the streets, but what about cats?

Well, for one time there is a hidden “political meaning”: since 2008, the State Government of Penang has pledged to use good governance, running its administration with a C.A.T. (which stands for Competency, Accountability, and Transparency) approach. That’s why even mural artists in Penang have started using cats throughout George Town… enjoy the gallery. And may the upcoming May 2018 General Election maintain a C.A.T. situation in Penang, and all of Malaysia, for years to come!

Let’s not forget to thank our photographer friend Bertrand Linet, the author of these great shots. Follow him on Instagram and show some support, for Bertrand spent the best part of a month walking around George Town, finding every possible piece of street art available, and documenting it with his camera. We will keep publishing the “Linet Penang Street Art” digital archive in the future… but for now, here you have the cats of Penang street art!

1 A Pyramid of Cats

Found at the western end of Armenian Street. This is probably George Town’s most famous and dreamy cat, called by some the “Fortune Cat” –  as you can see, she seems to be “lucky”, as she often gets all the girls 🙂

Tucked on a small alley behind Ah Quee street, just left and inside from the famous “Man on the Motorbike” mural by Ernest Zacharevic, this is one of our all-time favorite pieces of Penang street art. These days, the crumbling wall where Bruce Lee and the cats are etched has suffered a lot of damage, so you better hurry up if you still want to take a decent picture. This was shot a few years ago.

3An Army of Chinese Cats

Found on the outer wall of Cheah Kongsi on Beach street.

As expected, the psychedelicat is a bit hidden along Armenian Street, but not so tucked away you won’t see it walking past.

These two kitties may need some help because, instead of ending up in Armenian Street, they have been “abandoned” by their artist in the little alley that juts out of it. Go find them, and show some love and care.

This huge wall art of a resting tomcat is a mainstay among Penang street art, and loved by many, like the group above, who come to Gat Lebuh Armenian to pose and take selfies and wefies in front of it.

7Cheeky Cat in the Wheel

This little rascal of a cat is swinging just about 20m from the entrance of Cannon Square.

An interesting fusion of cats, Asian popular culture, and Western pop cultural imports (the Minion)… and cheese, obviously. A long-standing mural not far from China House, which has made Victoria street proud for many years.

This cat floats at the Corner of Pitt and Acheen Street.

What we think is an “Egyptian” cat decorates the outer wall of the 1921 Art Gallery and Travel Lodge in cool Kampung Kolam, at the lower end of Carnarvon Street.

Once again, all the cool cats seem to hang in the small alley that juts out of Armenian street… go find them.

This quirky, Orwellian cat is observing visitors from the wall of Ah Quee Street. Try to stay under her radar…

13The Waiting Cat in the Window

The last cat in our collection is by no means the ugliest. Indeed, she makes a wall along Pitt Street light up with joy… and she’s a cutie to the passing postmen, too.

And if you liked this, why don’t you sign up for our mailing list? We will send you immediately a FREE photographic eBook with some incredible pictures of Penang, and we promise, we will disturb you only about once a month with some good local advice you won’t find on the site 🙂