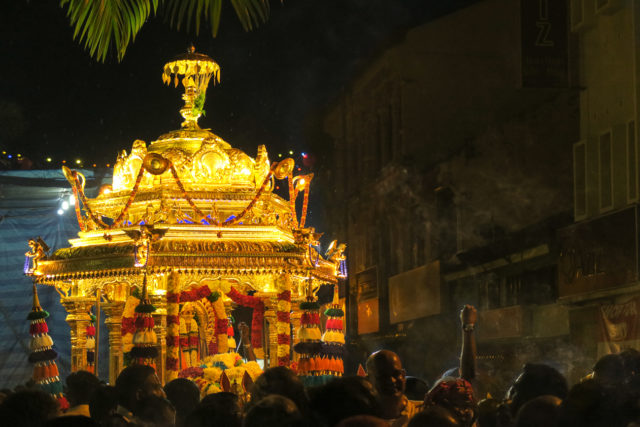 New visitors almost always come to the island with three things in mind: George Town, Penang Food, and maybe check out one or two of the best Penang Beaches. These things can be done every day, all year round, and are more or less always the same – given Penang’s blessed tropical climate and never-ending summer.

What most first time visitors don’t know, however, is that by paying attention to the calendar, a well-timed visit to Penang can be shockingly more memorable. How? Just come during one of Penang’s incredible festivals. There are so many: the following 5 suggestions are well-known, but unmissable Penang experiences.

Just try to time your visit around one of these events, and you’ll leave with so much more memories – not counting a whole slew of SD cards filled with some of the most amazing travel photos you can snap in the whole of Malaysia – and arguably, Southeast Asia.

“try to time your visit around one of these events, and you’ll leave with much more meaningful penang memories”

This Tamil festival, the most important to Hindus in Malaysia, is a visual smorgasbord and one of my all-time favorites. Celebrated to remember the fight of the spear-toting Lord Murugan against the demon army of Soorapadam, it runs for 3 days. Actually, if counting the day when the golden and a silver chariot depart George Town’s Sri Mahamariamman temple. Year 2017 marked the 231st edition of Thaipusam, and the introduction of the golden chariot – one which brought a bit of controversy.

The 10km procession to Penang’s Hilltop Temple is famous for its gruesome ceremonial kavadis (or sacrifices in the form of physical burdens). They range from the overhead hauling of metal pots filled with milk, to supporting intricate canopies of metal rods over the shoulders, and the piercing of cheeks, tongues, and bodies with hooks and skewers. Whether you decide to follow all or part of it, for example, by going to witness the ceremonial piercings at the Sri Muthu Mariamman Temple in Lorong Kulit, make sure you have spare batteries and plenty of SD card space on your camera.

When: First Full Moon of Tamil Month of Thai (between January and February)

This is another of my favorites, as I described here. A cheeky and cheesy festival thrown by the Chinese community to honour their dead. It is said that life in hell is a miserable affair, so much that once every year, King of hell Tai Su Yeah breaks the hell gates letting the dead unleash upon Earth. George Town fills up with impromptu shrines set under precarious lean-tos where the Chinese revere paper statues of Tai Su Yeah. They offer foods and entertainment: these days, instead of Chinese Opera, the dead prefer the performances of sexy and curvaceous singers. Don’t sit in the empty chairs at the front, that’s Hell’s VIP area. In the end, all ghosts go back to hell… in flames.

When: Nine Month of the Lunar calendar (usually August/September)

This month-long festival, organized by Joe Sidek Productions until year 2018, has grown in the past 8 years to become one of Southeast Asia’s leading culture and art festivals. International and local performers come together on the stages of George Town, offering anything and everything, from ballet to traditional kuda kepang – a form of Malay ritual dancing, which most often ends up with trance –  from art installations to street art. Remember that Ernest Zacharevic started his series of worldwide famous murals as a part of this festival.

This is Penang’s only literary festival and one that’s garnering more and more international momentum. If you like books and the written word, it’s an excellent occasion to come together and talk about it. You will rub elbows with international and local authors in one of Southeast Asia’s most arty and cultured small towns. Besides a book market, the festival is centred on a series of panels and workshops, most of which are free of charge.

When: One late weekend in November

Another colourful celebration that comes right at the end of the Chinese New Year. Be ready to mingle with hundreds of locals at the Clan Jetties, just a 5-minute walk from Chulia Street. It’s a parade of burning giant joss sticks, tables adorned with foods and countless barbecued pigs, lion dances and a showcase of fireworks that – let a local tell you – it’s best seen from the water. How? Just walk at the end of any of the Clan jetties that line Weld Quay, and enjoy the show.

When: On the Eight Night of the Chinese Lunar New Year

5 Best Ways to Travel from Kuala Lumpur to Penang

Hey there! I am Marco, the travel writer behind this blog. I have been living in Penang since 2009 and have written guidebooks to Malaysia and George Town for the Rough Guides. Click here to find out more about me and why I want to share my Penang knowledge with you.

5 Best Ways to Travel from Kuala Lumpur to Penang

8 Amazing Things to Do in Teluk Bahang at Taman Negara...